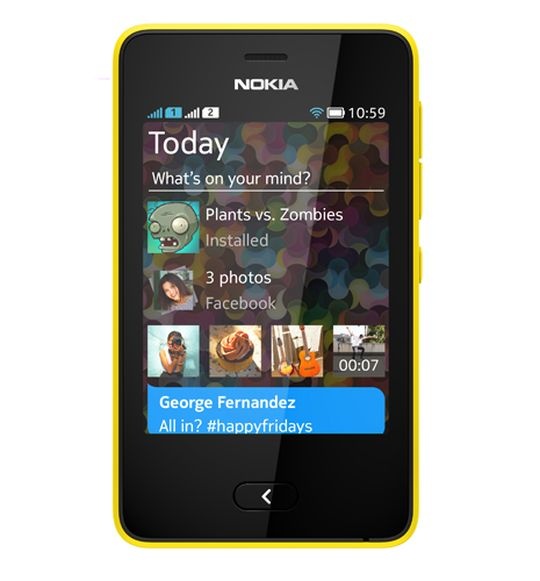 Nokia Asha 501 powered by the 1 Ghz processor and 512 MB of RAM. It has come up with a 3-inch 320x240px QVGA resolution Touchscreen display.  It comes with two homescreens: one is a ‘Fastlane’ which is the default homescreen and the other is the traditional screen which lists all apps. ‘Fastlane’  is more like a notification panel where you can see all the present happenings via widgets, past notification.

The device will come in two variants: single SIM and dual-SIM. You can interchange the dual-SIMs without having to power off the device. For the first time, Nokia has introduced the Micro Sim Card for this Low end phone.

TheAsha 501 will come with 2G only to target at developing nations where 3G connectivity is still not popular.  But It will have Wi-Fi connectivity for faster uploads and Browsing. Nokia also said that they will develop 3G version later on.

Asha 501 will come Bundled with free data plans in Asia Pacific regions. For this, Nokia has tied up with leading telecom operators in those regions. Also, It has Preloaded with many Social Networks Apps like Facebook etc. This phone has  Nokia Xpress browser which compresses the traffic letting users browse easily even over slow networks.