Google has added the Remote Desktop Feature to Google+ hangouts, using this new feature remotely connect and control your friend’s and family’s computer for tech support and other issues.

Google+ hangout is the free video calling service provided by Google in their Google+ social network. Using Google+ hangout, make video call session with your loved ones from your computer and from mobile Google+ apps for Android and iPhone. The user limit is nine. You can have nine people in the single hangout session. 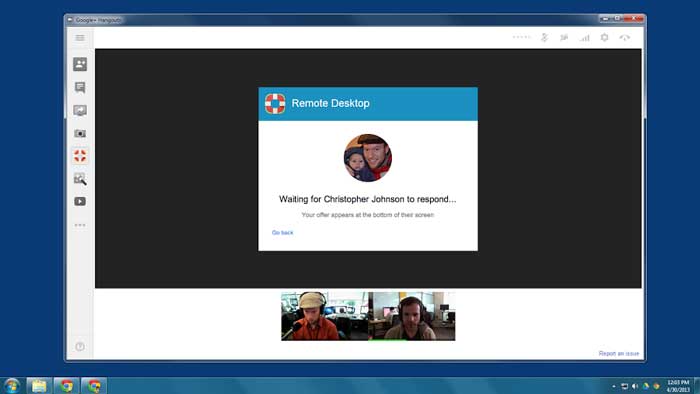 This could be a good alternative to remote access tools like Team viewer, LogMeIn,GoToMyPc and Skype share desktop. So, Google+ hangout Remote Desktop feature will potentially give more advantage to Google+ to get more users.

How to Get Remote Desktop Feature in Google+ hangout:

To get Remote Desktop Feature in Google+ , just start a Hangout and click View More Apps > Add Apps > Hangouts Remote Desktop. If you are new to Google+ hangout, you have to install Hangout plugin in your computer to make hangout calls.

Unlike other Remote Accessing tools, Google+ Hangout Remote Desktop is completely free, and you can make use of it to troubleshoot many computers in the Hangout session.

It saves you the long telephone calls to tech support. Even any of your friend can easily control your PC to fix your problems.

If you are Google Chrome user, checkout the Chrome Remote Desktop App to remotely control the computers bit faster and securely.