The IPHONE runs on Android – Now sale in Brazil

The company in Brazil named gradient is selling their  handsets under brand name of IPHONE for a simple reason: the Gradient owns exclusive rights record under the brand IPHONE in the country, even the name of the smartphone iPhone manufactured by U.S. giant Apple. 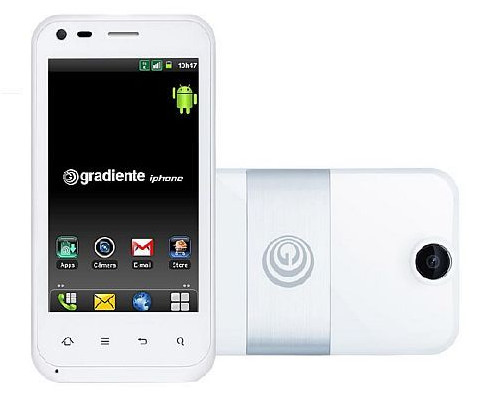 In 2000, the company filed a trademark registration for the name IPHONE  in National Institute of Industrial Property. On January 2, 2008, the company had its registration granted by the federal agency and now holds the exclusive rights to production and marketing of such mark by 2021, “says Gradaint, in a statement.

Actually Gradient  IPHONE runs on Android operating system version 2.3.4, has a 3.7in screen, features dual SIM slots, front and rear cameras (no indication on the sensor size) and is priced at $285.00 off contract. The 16 GB  iPhone 5 by Apple was sold to consumers in Brazil at US$ 1,150.00 on Brazil.

The Gradient company is simply trying to exploit the IPHONE name and want to cash-in by selling their phones under the brand name of iPhone. Even though it has filed Trademark for the name IPHONE while ago in 2000. It is legal that can use the brand name of IPHONE in Brazil.

So if you are in Brazil, you can buy this IPHONE Android phone.  Share your thoughts about this IPHONE , below in comments..

Asus' Transformer Book Trio Runs Windows 8 and Android Same Time
Finally, iPad Mini is available in Brazil from June 25
Bracelet Alerts by Flashing Lights When You Get SMS or Email in Android or iPhone
Real Racing 3 Released for Free to iPhone, iPad and Android devices